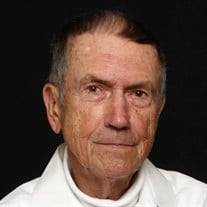 Dr. Louis Kurtis, age 93, passed peacefully at Besser Senior Living Community of Alpena, Michigan, on July 27, 2021. He was born on June 17, 1928, in Hamtramck, Michigan, to Louis A. and Mary (Zwolinski) Kurtis. Lou’s academic career took him from Cass High to Michigan Tech (Sault Branch) and then University of Detroit and U of D Dental School. Shortly after graduation he was called to serve in Germany. Some Dental work, a bit of soldiering, and plenty of flying, hunting, and skiing. He returned to Dearborn Heights, Michigan, and met Catherine Greenwood. They dated for many years until he finally proposed in 1965, they were married in ‘66 and had their son, David a year after. They moved to Chippewa County is 1972 and Lou started a Dental Practice in Sault Ste Marie. He planted a few acres a couple miles outside town. Never an underachiever, Louis endeavored to accumulate property in Barbeau, Goetzville, and Detour Village. Lou was involved in many “hobbies” such as farming (Cattle and horses), aquaculture, tree farming, and wind power. He was an avid hunter and fisherman. He was involved in QDMA, food plots, and the building of ponds and Lakes. He would often say, “What kind of man would I be if I didn’t leave the World better than I found it?” Lou loved Dentistry, seeing a patient leave more confident and comfortable than they arrived. He almost certainly enjoyed the captive audience as well. He was proud of his staff and that they were as close as family. “Doc” retired in 1992 and moved to the Goetzville, Michigan area. He had land adjacent to his grandparent’s family farm. Again, he worked to transform the land into a wildlife paradise. When in public, he worked the crowd like a seasoned politician. There was never a stranger, but a friend he hadn’t yet met. All were welcome and most stayed for a meal. The last decade was marked by a battle with Parkinson’s. Like everything else in his life, he studied and researched. He never let it define him, it was just another fallen tree along his path. Lou marched to a different drummer; he always chose the path less travelled and was a very good man. Louis was often dismayed his son David did not chose teaching as a career (Summers off to work for dad) but was most pleased when he married Chantelle and joined her business (Northwest Fudge Factory). Doc’s careers now included “official taste-tester.” Lou was very proud of his grandchildren, Ella (12) and Austin (7), and often remarked that his grandchildren were ‘the best’. His only regret was that he didn’t have more time to watch them grow up. The last year has been hard on all, but he and Catherine have been well cared for and much loved at Besser Senior Living Community. Doctor Louis Theodore Kurtis, Captain, US Army Retired left his mark on many of us. He changed the world he lived in. He will be missed, but more important; he will be remembered. A Memorial Mass will be announced at a later date

The family of Louis Theodore Kurtis created this Life Tributes page to make it easy to share your memories.

Send flowers to the Kurtis family.